This web page might reside on various servers, please use the link http://eelpi.gotdns.org/. So if it does move, you'll still get to the right one. Thanks.

I work at Intel on GPU and CPU core architectures.

I worked at Oculus VR on the distortion and timewarp presentation pipeline.

I worked at Valve Software doing Virtual Reality R&D. I wrote big chunks of the Team Fortress 2 VR support for the Oculus Rift.

I worked at Intel as a software and hardware architect on the Larrabee project, which became Knights Ferry/Corner/Landing, and sold as the Xeon Phi.

I worked at the fabulous RAD Game Tools in Seattle, where I worked on Granny3D, which is a runtime animation package and mesh export pipeline. If you're a games company, you'd be crazy not to at least get an evaluation.

I worked at wonderful wonderful Muckyfoot Productions in Guildford until its demise where I worked on Urban Chaos, StarTopia and Blade II.

In the past I have also worked at 3Dlabs, Sega, and Microprose, as well as run my own tiny games company you've never heard of.

The Papers Wot I Wrote - all my published work and lectures.

A collection of public info about Larrabee/Knights/XeonPhi.

I have a now rather obsolete FAQ about DirectX - especially useful if you need to cope with really old graphics cards.

I did a new patch for StarTopia! which incorporates some of my shadowing ideas.

I usually hang out on the GDAlgorithms and DirectXDev mailing lists, and the GameDev.net forums, although Twitter has replaced most of these now.

I have lots of hobbies, but this is my most expensive and visible one.

...and another Caterham Seven SV, but this one's a race car that I race in races.

Nissan GT-R. Fast in an entirely different way to the Seven - it's refined and eminently capable - barely breaks a sweat until you're north of 100. Nissan have made an awesome beast of a car.

Ford Focus RS. Our "practical 4-door 4WD hatchback". With 350hp. And it makes childish farty noises. An absolute hooligan. I love it!

I helped mod a Wiki server to be more C++ friendly. It's over here.

The GamePark32 - possibly the best handheld gaming platform in the world - ever.

I like XCom. And who doesn't? I used to have some very hacky tips on running XCom Apocalypse under XP which didn't really work very well and the sound was a bit funny, but the other day I just went and bought it off Steam for $5, and the chaps at Valve have made it Just Work with no screwing around.

If you haven't met me recently, I changed my hair just a tad. Here's a before and after:

And on a happier note, I got a plaque for Larrabee / Knights Ferry. Which is cool.

I put the US$ quarter there for scale. I suspect there's no actual chunk of silicon inside this particular package, but still - that's a big mother hubbard of a chip. I've shipped games before, and that's pretty damn cool to see the box sitting on the shelf in the shop, but in the end it's "just" a DVD. This - this is a chunk of sand and metal processed with the finest technology in the world, and the original design and principles - I thought of that. That's pretty cool. 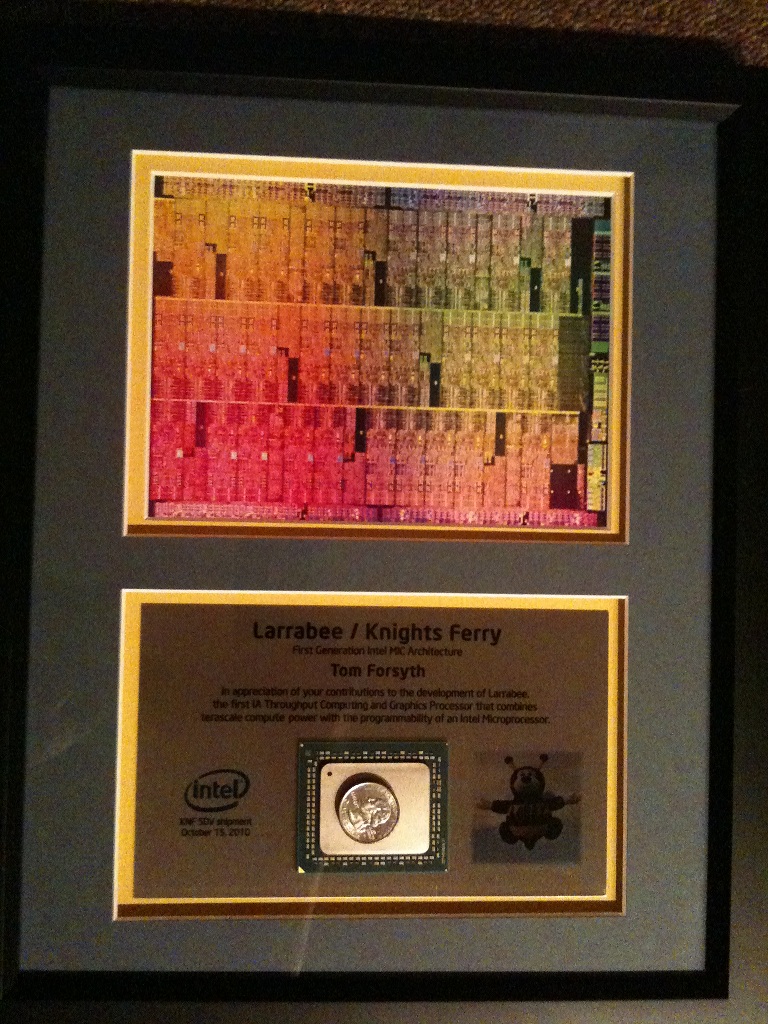